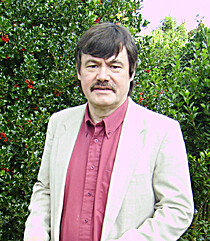 Sobre mimI was born in Surrey, and now live in Herstmonceux, East Sussex, in a 14th century Wealden Hall House, (which is also a restaurant and tea rooms). I’m married with two sons.
My father was a well known writer; mainly of novels and biographies, although he wrote several screenplays. He was also a regular contributor to BBC Radio drama (including Mrs Dale’s Diary!), and a founding writer for the Eagle comic.
Much of my early life was hampered by Dyslexia, although I now consider the lateral view this condition can give to be an advantage. I’ve been writing professionally for over twenty years with work covering broadcast comedy (commissioned to BBC Light Entertainment for 3 years), periodicals, children’s stories, television and the stage. I am also a regular contributor to nautical magazines and newsletters.
The "Fighting Sail" series of books are set in set during the Revolutionary wars but differs from the normal Hornblower/Aubrey sagas in that there is no “hero who becomes an admiral”, rather characters from all divisions of the ship are featured, some to prosper, while others fail; many will continue in future books. Culminating in the pivotal Battle of Cape St Vincent, The Jackass Frigate is based on historical fact, and includes notable figures of the period including Jervis, Calder, Hardy and Nelson.
The prequel ‘His Majesty’s Ship’ was released in the summer of 2009.
My interests include the British Navy 1793-1815 and the RNVR during WW2. I regularly give talks to groups and organizations and am a member of The Historical Maritime Society and the Society for Nautical Research. I also enjoy Jazz, swing and big band music from 1930-1950 (I’ve played trombone for over 40 years), sailing, old SAAB convertibles and badgers.