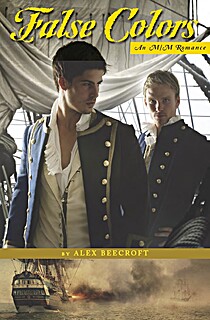 Sobre mimHi! I'm a proud new writer of m/m romance. At the beginning of 2008 my first book, Captain's Surrender was published by Linden Bay Romance, after winning their world-wide annual competition.

To quote from Linden Bay:

Captain’s Surrender, a male/male historical novel set in 1779, is a beautifully written tale of forbidden romance between two star crossed lovers who are trying to survive life in the British Navy during the war with the Colonies. It’s filled with passion, intrigue, and the kind of compelling heroes that you’ve come to expect from a Linden Bay Romance novel--two of them, actually.

My new book, "False Colors" is being published by Running Press, a subsidiary of Perseus Books, in April 2009, as part of a project to spearhead the introduction of m/m romance into the mainstream. That will be available from bookshops on both sides of the Atlantic.

Alex Beecroft currently lives in Great Britain with her husband and two daughters. Raised in Cheshire, Alex studied English and Philosophy before accepting employment with the Crown Court where she worked for a number of years. Alex will tell you that she's thrilled to be doing what she always wanted to do, living her dream of being a writer, and a published romance author.

Find me at my website by clicking on the banner:

Sobre a minha bibliotecaVery eclectic (I hope) and only sporadically updated.