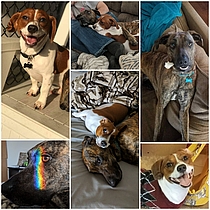 Sobre mimI am 31 years old, and I currently work as an accountant for a local insurance company. As for my taste in books, I like fiction novels best, particularly classics, dystopian literature, and literary fiction, but I'll give nearly anything a chance. As for films, I really enjoy films that are quirky, post-apocalyptic, about people with psychological disorders, and/or dystopian.

Sobre a minha bibliotecaI own everything in this collection.

I have a separate account for books on my wish list or that I have borrowed: Borrows-N-Wants.

I have also added my husband's books to this collection. So any terrible books you see, just assume they are his. ;P

Tags:
Incomplete: Used for books that are part of a series that I don't own the entire series. Series include books that only have one sequel.

DNF: After several years of being a fierce completist, determined to finish any book I read the first word of, I have finally swallowed my pride and embraced the DNF tag. Life is too short to force myself to be miserable and waste time reading books I cannot stand. I use the DNF tag for books I at least gave the fair chance of getting through about 50 pages of. Anything less remains tagged only as "Unread." At some point, I will re-attempt my DNFs, and if they still do nothing for me, I will donate them.

How my rating system works:
I use the same rating system here as I use on Netflix:
5 Stars: Loved it!
4 Stars: Really liked it.
3 Stars: Liked it.
2 Stars: Didn't like it.
1 Star: Hated it.

Note: I rate a lot of things 3 stars or above because I don't typically buy something unless I know or have a really good feeling I will like it.