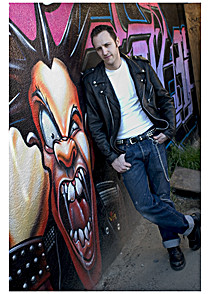 Sobre mimRuss Lippitt hails from the lower class, project homes of New Jersey’s finest. Raised by a drug-dealing, Hell’s Angel biker he called Dad and a pole-dancing junkie, his future was almost written in stone.

Through writing Russ had found his escape from reality by creating a world worse than his own. In his teen years he had often bumped head’s with the law, so naturally inspired by Punk Rock and Anarchist views, he set out to become a rule-breaking writer, dedicating himself to learning the rules just to deconstruct them more fully and artistically. To this end, he shipped himself off to The Academy of Arts College to polish his writing talent. It was there where he began to write his first novel, Lion’s Share which was later published by Ravenhawk Books. Since then the novel has been growing into a cult status among young adult readers. Lion’s Share has been reviewed globally from high fashion magazines to underground music zine’s. Critics have quoted Lion’s Share to be, “The next Outsiders!” Mark L. Lester, director of Commando and Stephen King’s Fire Starter, requested to option Lion’s Share but after the economy hit rock bottom the project went on a permanent hiatus.

Shortly after, Russ was hired to ink a screenplay for American World Pictures that never saw the light of day. After being discovered on InkTip.com, Desert Moon Pictures hired him to write a Mixed Martial Arts movie which later fell through when the investor backed out. Constantly writing, he has finished his 7th script, one in each genre, proving he is a multi-dimensional writing and format jumper. Russ has started his own business, founder of Left Brain Writings LLC. He has just finished his second novel, part of an epic trilogy which is going to be released in early 2011 and a graphic novel based off one of his contest winning scripts, in 2012.

“LION’S SHARE IS A CAPTIVATING STORY IN WHICH EVERY ROCK’N’ROLLER CAN RELATE TO!” - Laurent, Veglam webzine

“THIS IS ONE OF THE BEST GREASER/PUNK/OUTSIDERS BOOK THAT YOU WILL READ!” - Josh, Bad Kat Magazine

“FAST PACED AND ENTERTAINING, INTELLIGENT WITH OUT BEING TOO INTELLECTUAL. PUNK ROCK!”
- Karl Backman, Summer of Hate

“IN THE SPIRITS OF THE OUTSIDERS AND JACK KEROUAC’S ON THE ROAD, I RAISE MY GIN AND TONIC HIGH IN AUTHOR RUSS LIPPITT’S HONOR!”
- Outsight Radio, Tom Schulte

“AN ENTERTAINING AND A GOOD READ!”
- Lola, Distorted Magazine

“AN EMOTIONAL STORY OF A REBEL TEENAGER FILLED WITH FRIENDSHIP, TREASON, SPEED AND ROCK-N-ROLL, A DEFINITELY WORTH READING NOVEL!”
- Mircea, More Punk Then You Zine

“SIMILAR TO A MONÈT, LION’S SHARE SHOULD BE ADMIRED AND STUDIED FROM AN OBJECTIVE, SAFE, DISTANCE!”
- Hans Shephard Jr., 6DOF Media

“COMPARABLE TO THE OUTSIDERS! LION’S SHARE REACHES INSIDE THE ALL TOO REAL BRUTALITY OF TODAY’S JUNGLE WORLD!”
- Target Audience Magazine

“THIS BOOK ABSOLUTELY FLOORED ME, A GREAT READ!"
- Jenka, The Subculture Collective

“I WAS ENGROSSED IN THIS BOOK FROM START TO FINISH!” - Steve, Street Voice Newsletter

“LION’S SHARE IS A 138-MILE-AN-HOUR RIDE ON THE BACK OF A MOTORBIKE!”
- Brent “The Catfish” Balinski, Deadbeat Magazine

“LION’S SHARE WAS A PLEASURE TO READ, I DIDN’T WANT TO PUT IT DOWN!”
- Pete, Mild Peril

“A DAMN FINE READ FOR ANYONE WHO HAS EVER FELT THE NEED TO REBEL AGAINST EVERYTHING OR ANYTHING!” - Rick Wills, Devolution Magazine

“I ENJOYED THE HELL OUT OF THIS NOVEL, A GREAT BOOK FROM AN EXCELLENT AUTHOR!” - Tim, Anti-Hippie Fanzine

“WHAT A TREASURE!” - Richard, Punk or Nothing Webzine

“THE BOOK IS WELL WRITTEN AND CAN BE SOLD IMMEDIATELY TO THE MOVIES!” - Marc Bristol, Blue Suede News

“IT’S AN INTERESTING BOOK, WHICH HOLDS THE READER IN A TIGHT GRIP UNTIL THE END!” - Christophe, Out of Step Zine

“LION’S SHARE GETS A HORNS UP!!! WOULD MAKE FOR AN EXCITING MOVIE!” - Micheal Rys, Global Punk Review

“IT HAS NEVER BEEN THIS DANGEROUS TO READ A BOOK!”
– Olga Vizcarra, OMGEE Magazine

“THE NOVEL IS A WORK OF FICTION THAT THOSE WITH AN INTEREST IN ‘THE WILD ONES’, ‘THE WANDERERS’, REBEL WITHOUT A CAUSE’, AND ANY TARANTINO MOVIE WILL ENJOY WHOLEHEARTEDLY!” – Mark Armstrong, Dynamite Magazine

“MOST CONTROVERSIAL BOOK OF THE YEAR! WE’RE WITNESSING THE NEXT OUTSIDERS!” – Heather Phillips, Riders Review