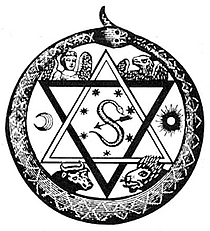 Sobre mimI am just a regular person who is a Thelemite. I explore and practice magick in it's various schools and forms. I like to be very well informed on any subject I care to delve into. I have always been very much like this since I was in Middle School. I love books and those things that have anything to do with them. I am a bibliomaniac without a doubt. A lot of what I have gotten was because of the lack in resources here locally so I have had to make up for that. What kind of Thelemite doesn't have a library?

Sobre a minha bibliotecaMy library is the result of my continuing quest for knowledge. So I have collected a great deal that couldn't find locally any other way at the time. Over the years I have had and have many interests and I think that my library reflects that.

I started collecting as a teenager. My bedroom and later my parents Recreation room had my library from that era and to great extant during my college years and for awhile, after I graduated. My sister decided to clear the rec room and delivered whats left of my fathers and my books to me on my front porch without letting me know in advance, Thank You Lisa! I Love U! :-( Thank Heaven I got there just as it started to rain. I have yet to catalog or even go through all the boxes yet. Like all good things it will take time. A small update as of August 2009. I am now finally going through those boxes my sister left on my old porch. I have since moved as of 1 April 2009. It was quite a load.