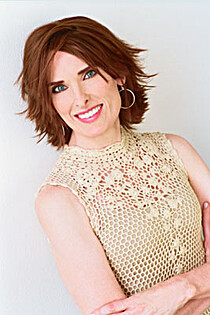 Sobre mimSusan McBride is the USA Today Bestselling author of Blue Blood and five other award-winning Debutante Dropout Mysteries from HarperCollins/Avon, including The Good Girl's Guide To Murder, The Lone Star Lonely Hearts Club, Night Of The Living Deb, Too Pretty To Die, and Say Yes to the Death. Susan has another bestselling series with Avon, the River Road Mysteries, including To Helen Back, Mad as Helen, and Not a Chance in Helen. Come Helen High Water will be out in June 2016. Susan has also written young fiction for Random House (Very Bad Things, The Debs, etc.), and women's fiction for HarperCollins (Little Black Dress, The Truth About Love & Lightning, and The Cougar Club). Her memoir, In the Pink, details her life in the 40s: falling in love with a younger guy at 41, being diagnosed with breast cancer at 42, and having a baby at 47.

In addition to her mysteries, Susan has penned three well-received women’s fiction titles. The Truth About Love & Lightning (02/13) was selected by Target stores for their Emerging Authors program, was a Midwest Connections Pick, and was dubbed "a poignant page-turner" by Publishers Weekly. Little Black Dress spent five weeks on the St. Louis bestsellers list and was a Target Recommended Read. The Cougar Club was selected by Target Stores as a Bookmarked Breakout Title and named a Midwest Connections Pick by the Midwest Booksellers Association. Foreign editions of Susan’s books have been published in France, Turkey, Croatia, and Bulgaria.

Susan has one nonfiction title available: In the Pink: How I Met the Perfect (Younger) Man, Survived Breast Cancer, and Found True Happiness After 40, which tells her tale of becoming an "accidental Cougar" and marrying a younger man, her cancer diagnosis at age 42, and finding herself pregnant at 47.

She has authored several YA non-mystery novels for Delacorte about debutantes in Houston: The Debs (2008) and Love, Lies, And Texas Dips (2009). Gloves Off, the third book, has not been released.

For more information, visit her web site at http://susanmcbride.com

Sobre a minha bibliotecaI read mostly fiction, from YA to literary novels to mystery/suspense. I love discovering new authors (at least, those new to me!). So if you ever have some recommendations in those categories, please spill.