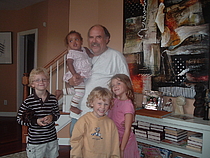 Sobre mimI have been collecting books all my life. Started witn the Ace paperback Edgar Rice Burroughs series. Finished my paper route, cut the neighbors grass, went to the variety store, gave him .35, .40 cents, and took my treasures home. Still got 'em. (along with every Country Joe and the Fish album.) The kids panic when I tell them, someday this will all be yours.

Started my first job as a page for The Cleveland Public Library. Fell in love with the place. Used to take my lunch and breaks up in the stacks. Row after row of old and sometime forgotten books. It was like being in a special church. I still remember the sights, the smells and how quiet it was.
I wish now that I had gone to college to study literature but life happened and I didn't. I'm not complaining, just wish I had more formal education.
I'm an aging vegan hippie who lives with my wife, two rescue dogs, four rescue cats , one rooster and four hens. We now have two miniature donkeys, Maggie, the mother and her baby Paddy, born on St. Patrick day in 2010. We added two more miniatures. Rose and her baby Georgia who was born on June 17,2010. I live in a log home in the middle of forty acres in a very rural area. I left the city behind.
Time to update....I moved from Ohio to Panama City Beach Florida. I can sit on my porch and see The Gulf of Mexico. Still like my books, so that hasn't change.

I'm running out of space to put books! If only my wife would get rid of her royal doulton collection, I could put a nice set of Sir Walter Scott in their place.

GruposCurrent Events, Fans of Russian authors, Geeks who love the Classics, History: On learning from and writing history, Horror!, MyPeopleConnection Book Clubs, The Brontës, Thing(amabrarian)s That Go Bump in the Night, Victoriana, What Are You Reading Now?