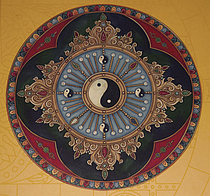 Breakdown of the collections in my library:
"Your library" - Books I've read, and which I own
"Read but unowned"
"Currently reading"
"To read" - Books which I own but haven't read
"Wishlist"

I am still yet to upload my full library to my profile but have been working on it for some time. I' ll get around to it eventually.

"Consider everything, believe nothing."

"Nothing is true, but everything is permitted."
~ Supposed last words of Hassan i Sabbah

"I don't believe anything, but I have many suspicions."
~ Robert Anton Wilson

"Let us learn to dream, gentlemen, then perhaps we shall find the truth."
~ August Kekule

I've always been open to the possibility that the expansion of one's consciousness may indeed be the key to a better life for all those who seek it. My favourite band growing up was Nirvana, so the first thing I had to do was look up what the hell it was. Turns out it's enlightenment. While I didn't do any more searching than that as a kid I always thought wouldn't it be cool to just be awesomely wise and powerful? Kind of like a god? When I was much younger I'd gone to church, read the Bible, and generally gone along with it. Once I started watching movies and learning a bit more about history (in a general sense; I HATED school) I became less attached to the idea of believing in 'God' and just generally went all out to be as rebellious against everything that I could. This made me start getting into psychedelia: the idea of altering one's consciousness again crops up.

I've always been a writer, and being obsessed with films I'd always wanted to make my own. As the years went by though I never materialised my writings into anything on the screen so I took that hat off and decided to stick to the writing. As the years went by though I'd never really been into reading other peoples' works. Cinema was enough for me. As I grew older I wanted to know more about the people behind the films I loved so much. The ideas of Stanley Kubrick, Andrei Tarkovsky, Ingmar Bergman, and many others intrigued me so much. I once stumbled across a quote from director Werner Herzog, he said "Those who read own the world, and those who watch television lose it." This got me intrigued. These directors all talked about the ability to transcend the normal boundaries of awareness by creating something special that can be devoured by thousands of others whilst sat in front of a screen. That these ideas were out there mesmerised me, and I adored the fact that these people wanted to share their ideas with the rest of the world. I guess that reading Herzog's quote was the catalyst for this natural progression into reading books.

So, eventually I picked up 1984 by George Owell, and then shortly thereafter Huxley's Doors Of Perception.
After that, the floodgates had opened....

Now I am first and foremost a writer, most of the things I've published online are simply anecdotal works about subjects I am interested in. But I have written many stories, screenplays and larger pieces of non-fiction in which I dissect a lot of information. I've not really been looking for a publisher for much of this material but have given it much thought....

Soon after I started reading books my friends roped me into hip hop. Now I write lyrics and perform them over traditional hip hop beats.

You can find me elsewhere on the internet here:
http://last.fm/user/aaronwhat
http://rateyourmusic.com/~kingaaronz