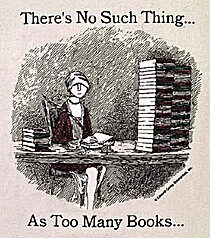 Sobre mimAmerican/Swede relatively recently relocated back to Göteborg, Sweden from Scotland. I read in waves, and sometimes have a couple things going at once.

Sobre a minha bibliotecaA mix of classics, cyberpunk, alternate history (esp. WWII), slightly offbeat or dark humor, graphic novels, modern lit, some utter fluff and more - in a few different languages. Tags & such are uneven and sketchy. My catalogue mainly includes books I own and have read, but also library books I've read since joining LT. Due to having moved a lot, read library books, or shared books around the family, etc. there is a lot missing.

That said, I periodically add books to LT I know I've read (collection: Books read once upon a time). Those will not be the actual publication I've read. It's a bit warts-and-all - i.e., there are books there I would not pick up today, or at least would resist until someone put a copy in my hands for free and I had nothing else to read at the time... But I read 'em, so they're here.

The books in my library are more likely to be rated and better represent (more or less) where my head is at these days.