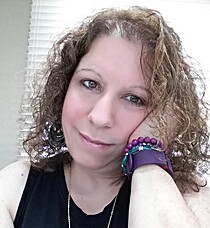 Sobre mimA big fan of the paranormal/fantasy romances and inspired by the likes of J.R. Ward, Nalini Singh, Lara Adrian and Karen Marie Moning, T.M.'s stories tend to be a little out of the box...and out of the normal world. Coming under the collective heading of "Stories from the Mist," her books take place in various realms, at various points in time. Her stories are self-contained; each a stand-alone story in and of itself. Tired of vamp and were stories? Give the Mist a try - her alpha beasties are to die for!

"The Sagittary" was the first novel under the 'Stories from the Mist' heading to be published, released in 2007. Her novel "The Colubrii: Awakening" was nominated for the 2012 Reviewer's Choice Award by the Paranormal Romance Guild and received Honorable Mention. Her third novel, "The Avalar: Daughter of the Air," was released in November 2016 and was nominated in two categories for the 2016 Paranormal Romance Guild's Reviewers Choice awards. Her fourth novel is currently underway.

Sobre a minha bibliotecaMy library consists of mainly horror and pararnormal romance, with a little fantasy thrown in for variety!