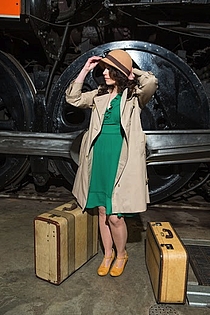 Sobre mim“When I get a little money I buy books; and if any is left I buy food and clothes.” Desiderius Erasmus

Thirty-something poet living in Portland. I studied creative writing at the University of Idaho in Moscow and my poems have been published in several anthologies, magazines, pamphlets, and zines by small presses in the US, Canada, and the UK. I have also been shortlisted for the Cinnamon Press Poetry Collection Award and in 2007, one of my poems won the London Shot From the Lip Poetry Competition. Since graduating, I have worked as a writer, an editor, and in three separate library systems in two different countries.

I'm nothing if not bohemian and gloriously old fashioned. I love to travel and experience different cultures, but equally I love to stay at home and think of my adventures.

Sobre a minha bibliotecaVery eclectic reader by nature, but have saturated myself with Paris in the 1920s. I lean towards literary biographies, travel and culinary memoirs, simple living, feminist studies, novels set somewhere in Europe between the wars told from a woman's perspective, and of course poetry.

wanted to live in it

why was I compelled to read this

***I have another library under READnotowned where I log books I've read but never or no longer own. ***