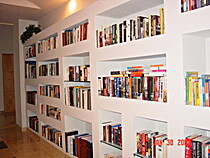 Sobre mimJAF and JAB - reviews by each The Goldbug Variations, by Richard Powers
The Family Moskat, by Isaac Bashevis Singer
Doomsday, by Connie Willis
The Closing of the Western Mind, by Charles Freeman
Albion's Seed, by David Hackett Fischer
books on Lincoln, Founders, cosmology for the general reader

Some of our categories need work: mystery and scifi in particular. When is a mystery a "thriller" or a "legal thriller" or "crime" or "espionage"? Similarly, there's that troublesome difference between scifi and fantasy. Robert Sawyer has a really good definition on his blog:

"Science fiction deals with things that might possibly happen (or, in the case of the subgenre of science fiction known as alternate history, things that possibly could have happened); fantasy deals with things that never could happen. There is always a path from our here-and-now to the milieu of a science-fiction story: usually that path simply involves time passing and plausible advances in science and changes in society taking place during that time. There is never a path from our here-and-now to the milieu of a fantasy story: no matter how much you might want to get to the fantasy world, you can't, because magic and supernatural powers do not work in our universe -- you can't get there from here. Succinctly: there's discontinuity between our reality and fantasy; there's continuity between our reality and science fiction."

And then there's the pesky problem of books about religion. (In one of my favorite job interviews for a job I didn't get, at the library of a large religious institution in Washington, D.C., I said (right before being booted out the door), "But you've got the Bibles filed under non-fiction!!!")

As soon as I figure out what's reality and what isn't, I'll fix our tags....