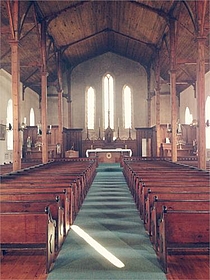 Plans for the current St. Patrick Church were made in 1852, with construction stopping during the Civil War and the church completed in 1866.

Built of Missouri limestone or sandstone and based on a 7-foot pyramid rock foundation. A dry mortar method was used in the initial foundation and wet mortar after construction resumed.

A fire in 1885 destroyed the rectory and damaged the church. Both were rebuilt within a year.

Sobre a minha bibliotecaThe church had a library as early as 1866, the Benevolent Society minutes on page 11 appointed a committee to value the books. February 1867 the society assigned a committee to purchase books from Boston, MA (page 20), at a later date the books would be purchased from St. Louis. March 1867 the society resolved that boys of the age 10 may be admitted to use the library for an admittance fee of fifty cents and ten cents per month thereafter. No member was allowed to have more than one book at a time and no member was allowed to loan a book to someone who was not a member, otherwise they would be fined. Rules of initiation required each member to donate a book (page 49). Every member not donating a book in accordance with the rules of initiation would be charged fifty cents to purchase a book. June 1872 women were admitted to use the library by paying the initiation fee and then ten cents per month thereafter (page 80). In the 1930s the library books were moved to the KC Hall to be stored.