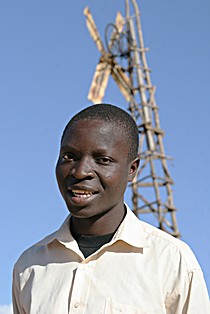 Sobre mimWilliam Kamkwamba
Biography
Background
William Kamkwamba was born August 5, 1987 in Dowa, Malawi, and grew up on his family farm in Masitala Village, Wimbe, two and half hours northeast of Malawi’s capital city. The second eldest of Trywell and Agnes Kamkwamba’s seven children, William has six sisters.
William was educated at Wimbe Primary School, completing 8th grade and was then accepted to Kanchokolo secondary school. Due to severe famine in 1992, his family lacked the funds to pay the $80 in annual school fees and William was forced to drop out of school midway through his freshman year. For five years he was unable to go to school.
Windmill and other projects
Starting at 14, rather than accept his fate, William started borrowing books from a small community lending library located at his former primary school. He borrowed a 5th grade American textbook called Using Energy, which depicted a wind turbine on its cover. He decided to build a windmill to power his family’s home and obviate the need for kerosene, which provided only smoky, flickering, distant and expensive light after dark. First he built a prototype, then his initial 5-meter windmill out of a broken bicycle, tractor fan blade, old shock absorber, and blue gum trees. He was able to power four light bulbs and two radios, and charge neighbors’ mobile phones. He then rebuilt a 12 meter windmill to better catch the wind above the trees, and added a car battery for storage, as well as homemade light switches and circuit breakers. He also experimented with building a radio transmitter to broadcast popular music interspersed with HIV prevention messages.
Subsequent projects have included clean water, malaria prevention, solar power and lighting for the six homes in his family compound, a deep water well with a solar powered pump for clean water, a drip irrigation system, and the outfitting of the village team Wimbe United with their first ever uniforms and shoes. Since receiving their sun and wind-themed uniforms, the team has been on a winning streak that has brought the village together with pride. William recently built yet another windmill to pump grey water for irrigation.
The windmill project drew many visitors from kilometers around, including Dr. Hartford Mchazime, Ph.D., the deputy director of the MTTA, the Malawian NGO responsible for the community library. Mchazime brought press, including The Malawi Daily Times, who wrote a long story. Soyapi Mumba and Mike McKay, engineers at Baoabab Health Project in Malawi blogged about the article, and news of William’s inventions reached Emeka Okafor, program director for TEDGlobal, a prestigious gathering of thinkers and innovators. Okafor searched quite diligently to find William and invite him to the conference as a fellow. William’s presentation led to additional mentors, donors, and companies supporting his education and further projects.
Playwright
Kamkwamba also wrote and performed a HIV prevention comedy with his six best friends, entitled You Can’t Judge a Book by its Cover to over 500 villagers on three occasions.
Education
Thanks to hard work and fundraising by Dr. Mchazime, William finally re-enrolled in high school at Madisi secondary school where he spent one trimester, and then transferred to African Bible College Christian Academy, a private prep school in the capital city of Lilongwe. He completed his first full year back in school in June 2008. During summer 2008 he studied immersion English at Regents Language Institute in Cambridge, UK.
In September, 2008, William started as one of 97 inaugural students at the African Leadership Academy, a new pan-African prep school based outside of Johannesburg, South Africa whose mission is to educate the next generation with rigorous academics, ethical leadership training, entrepreneurship and design (africanleadershipacademy.org).
Speaking
Kamkwamba was a fellow at the prestigious TEDGlobal Conference in Arusha, Tanzania where he spoke briefly (video at ted.com) and spoke at the World Economic Forum Africa (weforum.org) meeting in Cape Town, June 2008 where he keynoted the AMD-sponsored technology pre-conference, and spoke on a panel. He spoke at International CES in January, 2009, the grand opening of the African Leadership Academy in February, 2009, the Africa Economic Forum at Columbia University in March, 2009 and will talk at the Aspen Ideas Festival and TEDGlobal 2009 (both July, 2009)
Documentary Film
William is the subject of a documentary short film Moving Windmills, produced by Tom Rielly and directed and edited by Ari Kushnir and Scott Thrift of M ss g P eces which was selected as one of 50 films out of 2500+ entries for Pangea Day, a worldwide film which took place May 10, 2008 in six cities around the world. The film won the North American Filmmaker’s Award from Participant Productions, producers of An Inconvenient Truth, Good Night and Good Luck and Charlie Wilson’s War. See the film at http://missingpiecesvideo.com/kamkwamba/movingwindmillsFINALsubtitle.mov. Building on their initial success, Tom Rielly and Ben Nabors are currently directing and producing a full-length documentary on Kamkwamba.
Exhibit
Kamkwamba is one of a dozen innovators featured in a new one year exhibit Driving Force: Visionaries Redefining our World, which opened September 3, 2008 at the Museum of Science and Industry in Chicago (www.msichicago.org). The exhibit features the aforementioned film, photos, and actual hand-made electro-mechanical devices built by William.
Book
William is currently finishing his autobiography The Boy Who Harnessed the Wind: Creating Currents of Electricity and Hope with co-author Bryan Mealer (author of All Things Must Fight to Live a history of the recent civil war in Congo). William Morrow, an imprint of Harper Collins will publish the book worldwide September 29, 2009.
Media
Kamkwamba was profiled on the front page of The Wall Street Journal December 8, 2007, as well in major articles in The Malawi Daily Times, The Sydney Morning Herald, La Repubblica, and myriad blog posts such as Boing Boing, and his blog has been featured on the front page of news aggregators such as Digg and Reddit. He will be featured in an upcoming special Africa issue of L’Uomo Vogue.
Find William’s blog at http://www.williamkamkwamba.com, or contact William via Tom Rielly, tom@movingwindmills.org or 646.256.7419