For discussion of Camus's 1956 novel The Fall.

La chute ((English: The Fall) is a short novel by the Nobel Prize winning author Albert Camus. The novel can be read at several levels, obviously the deeper levels are difficult and less accessible, depending on the knowledge and experience of the reader. The excellence of The Fall is that the novel, although short, has so much more depth to offer.

The form of the novel is interesting, as the story is told in the form of a monologue of the narrator Jean-Baptiste Clemence. This monologue is not a confession to a priest, but a bar conversation. Not at the bar in a court of law, Clemence is a barrister, but in a pub in the Amsterdam city centre. The monologue is written in the typical type of conversation people sometimes have in such places, when they can unburden themselves to a stranger without limitations.

Thus, Jean-Baptiste Clemence tells the reader the story of his life. The essence of his life is what many people would consider the essence of their lives. Everyone believes that they are a nice person. This remarkable fact should be recognizable to any reader. No matter how deep the conflict in any human relation, each party always feels right. We learn that Clemence has lived the larger part of his life with the snug belief and image of himself as a good man, with a good heart, always willing to help others, by supporting the weak. But ,metaphorically extending a helpful hand is a very different matter from extending a literal helping hand. One day as a woman falls of a bridge, Clemence hesitates, and does not rush to help. The scene is sufficiently clever constructed, with a delay between the fall, the realization of what happened for Clemence to make the confrontation easy to neglect. The urgency is finely balanced at that edge where man has to decide to rush into action on the instant and the realization that one is probably (already) too late. This event makes Clemence doubt his ability to truly help people.

A second event Clemence tells his listener was pivotal in shattering his self-image. In a traffic quarrel Clemence appears as fairly reasonable, when suddenly the other hits him and rushes off. Dazed Clemence is left standing there, unable to get into action, and react. His failure to take appropriate action, that is to say what would be appropriate is his eyes, makes him feel impotent. Again, the situation, which involves another person is sufficiently complicated to make it psychologically entirely convincing, resulting in a total feeling of humiliation on the part of Clemence.

The power of the novel is to make the reader see that, while we generally have negative associations with the word "humiliation, it is generally felt that "humility" is a virtue. The Fall takes the form of penance, in which Jean-Baptiste Clemence falls from an elevated position to a lower position, in his own esteem. This humiliation enables him to see a much truer image of himself.

The novel contains a lot of material and many images and references that enable readers to extend the basic theme, and explore this theme at deeper levels. For instance, the novel is set in a bar in Amsterdam, the capital of the Netherlands, both in English and French alternatively known as "the Low Lands" (les Pays-Bas), to emphasize the descend from high to low. During World War II, the Netherlands was the country most co-operative with the Nazis in the deportation of Jewish citizens to the death camps. The pub in which Clemence tells his story is located in that historical quarter that used to house the largest number of Jewish people, and that was turned into a ghetto during the occupation. While the Dutch were least helpful, the French in Vichy-France were not very helpful to their Jewish compatriots either.

The admirable quality of The Fall is that the main theme is accessible to all readers who are interested and willing to spend their time reading literary fiction, unlike some fiction which is so inaccessible that all but professional literary critics can make any sense of it. In the case of Camus novel The Fall is may definitely interest some readers to read some additional literary criticism on this novel to deepen their understanding, and reveal other, beautiful and interesting dimensions of the book.

The Fall Albert Camus
Over the last two days I have read this novel twice, not that difficult as it weighs in at just 107 pages in my penguin classic edition. After the first reading I felt I had read a masterpiece as Camus writes trenchantly again about the human condition, but just what I had read I couldn't be sure. The second reading gave me some answers but raised even more questions. The prose itself is superb and Camus gives us some key incidents in the book that act like rafts in a grey sea that has no horizon.

Camus opening paragraphs in all his novels have an immediacy that seem to grab the reader by the scruff of the neck and even if you are not sure where you are being lead you are fascinated by the experience. "May I, Monsieur offer my services without running the risk of intruding? and so starts a dialogue in which you the reader are the willing participant, but of course you can say nothing. Camus places his reader in a bar in Amsterdam; you are approached by Jean-Baptiste Clamence a fellow drinker who proceeds to tell you about his life, thoughts and beliefs while impressing on you that he is a most unreliable witness, because as you know, men are duplicitous beings. Jean-Baptiste's story unfolds over a five day period in which you and meet and drink with him in the bar, take a walk with him through old Amsterdam, accompany him on a trip to the Zuyderzee and finally attend him in his apartment. Towards the end of the novel it appears that you and Jean-Baptiste are strikingly similar, both Lawyers, a similar age, both worked in Paris etc until it appears that you could be the same person, and perhaps this is after all a monologue in which you the reader are the narrator.

The Fall is brilliantly structured as were Camus two previous novels L'Etranger and The Plague The central incident and the one that challenges Jean-Baptiste to the very core of his being occurs almost exactly mid way through the book. Jean-Baptiste is a successful lawyer, he is fit healthy and wealthy with the world seemingly at his feet when one night he crosses a bridge and notices a girl looking over into the canal; he notices the back of her neck cool and damp which stirs him, but he walks on. Fifty metres further along the quayside he hears a splash and knows immediately it is the sound of a body hitting the water, he hears a cry repeated several times but:

The silence that followed, as the night suddenly stood still, seemed interminable. I wanted to run and yet didn't move an inch. I was trembling. I believe from cold and shock. I told myself that I had to be quick and I felt an irresistible weakness steal over me. I have forgotten what I thought then. 'too late. too far.....' or something of the sort. I was still listening as I stood motionless. Then, slowly, in the rain, I went away. I told no one.

From this moment on it is a different sounding Jean-Baptiste that relates his story, he admits to losing the thread, his lucidity that he was known for has deserted him, he no longer has a circle of friends and admirers and Camus story at this point becomes strikingly less lucid. The reader/or Jean-Baptiste struggles with concepts that seem just out of reach. It is brilliantly evoked by the trip to the Zuydersee where the flaccid greyness of the sea and sky blurs the horizon. The final meeting takes place in the apartment where Jean-Baptiste has a fever and his thoughts have taken on an intensity that is missing from the first part of the book and religious vocabulary abounds.

Early on Jean-Baptiste describes Amsterdam's concentric canals as resembling the circles of hell, "the middle class hell of course, peopled with bad dreams" and the first part of the novel is a summing up of the human condition through the eyes of this successful lawyer, much of it is deeply ironical which can be gleaned from the name of the bar 'New Mexico' where the monologue takes place. Camus wit and wisdom are given free reign as he hits home again and again with barbed comments on modern life. However the real meat of the novel is contained in the second part and here the major themes emerge. Jean-Baptiste/you and me; is all about power and domination, which he had acquired as a successful man in Paris. After the incident on the bridge his craving for power is still part of his make-up but it has been shaken by his inability to take action to save the girl. Power he says comes from the ability to judge others and we are all guilty of some crime. If we can recognise and come to terms with this then we have a powerful lever over others and can sit in judgement over them. It is almost as though Camus/Jean-Baptiste is demanding that the reader confess to their own guilt as he takes on the persona of a judge-penitent. This is powerful stuff.

The title of the novel La Chute (the Fall) will immediately alert readers familiar with Christianity that the novel may be heavy with religious symbolism and it certainly is. However Camus' references are by no means obscure and in my opinion enhance the central theme of judgement so as to make it difficult to avoid. I talked earlier on about the superb structure of the novel and echoes and thoughts reflect backwards and forward creating a ripple effect similar to the water in the canals. This is an outstanding work of literature, a work that can be read over and over again and perhaps if you do that you might get to understand all of what Camus was expressing, but at the moment for me it is tantalisingly just out of reach. So typical of Camus. A five star read of course. 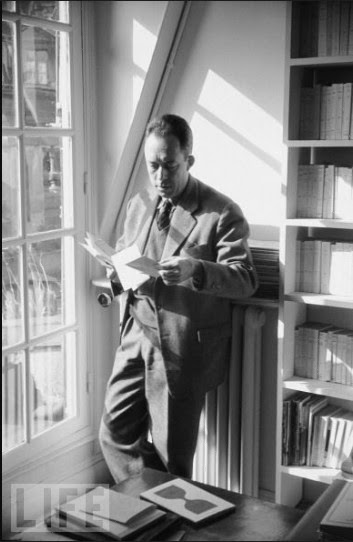