Is there a name for this landscape story technique?

Is there a name for this landscape story technique?

I just discovered and enjoyed Building Our House by Jonathan Bean. Bean starts with a long shot of the countryside where his parents begin homesteading and building their home. There are close ups and interior shots, but he regularly shows the changes being made from a similar prospect. I've seen this done often before, but now I want to catalog a tag for the technique. Is there a name for it?

I just startled myself by remembering another illustrator who uses it. Martin Provensen uses it in Shaker Lane and possibly others. Gonna dig out more of them.

I believe the classic in the sub-genre is The Little House by Virginia Lee Burton.

The House by J. Patrick Lewis, illustrated by Roberto Innocenti.

Going to tag them "timeline view."

The Innocenti book views a stone house and grounds originally developed in 1656 - the doorway headstone carries the date. It is built at the base of a fairly steep hill, with cobblestone retaining walls stepping up the slope. The book begins the story in 1900, with the property abandonned for quite some time, roofs in sore need of replacement. A family moves in and cultivates the small fields. By 1915, the vista is grapevines. We witness weddings, deaths, harvests, war refugees, and again abandonment in the 1990's till the property is redeveloped into a private enclave for a rich family. Don't like the ending, but I guess it's reality. Lovingly done.

Thanks for reminding me about The Little House. I love the design elements of that book. I think others of Mitsumasa Anno's books use a similar effect, i.e. the time/distance/close-up thing.

Jeannie Baker uses this technique, and mixed media, to document changes in neighborhoods and nature over time. We have always loved Window, and I've recently found Home and The Story of Rosy Dock.

In photography, that would by time lapse.

Another member pointed me to this page with a list of similar books:
http://www.playingbythebook.net/2012/05/21/urban-landscapes-picture-books-about-...

>6 lesmel: Y'know, the more I mull it over, the more I like Time lapse. Now how do I get everyone else to adopt it as a tag so I can find more books like these?

Oddly enough this approach is one that first makes me think of comics, because it seems to me a device more often used in them than in other books. In (animated) cartoons, as well. In both it serves as a sort of shorthand, a way of condensing &/or skipping over; it sounds as if the time-lapse effect is the point of these picture books, though. It is a terribly appealing notion. The only possible drawback is paradoxically a sameyness within a book, though I've seen very few examples & most of those in the linked site: The artist uses the same vantage point to best portray changes over the years but consistently viewing from the same fixed point would work against the sense of time passing. I'm extrapolating though & perhaps the house e.g. is throughout the book shown from different heights, the street from different angles, and it sounds as if Building Our House throws in some extras, as it were.

Possibly relevant is that my favourite picture book as a child was one about a piano that was painted different colours by many owners throughout its years. 'Time-lapse' sounds as good a tag as any, unless you want to use an appropriate variation of 'same time, same place'.

Well, look at how time passes!

I just bought my own copy of Innocenti's The House, and at the same time purchased The Great Green Mouse Disaster.

Waddell gets first billing as author, but since there is no text, he's actually just the idea man. He enlisted an illustrator who has a lot of practice in this technique though. Philippe Dupasquier has drawn a series of books called Busy Places. I intend to check some of those out.

While there are some interesting details in this hotel story, it is a failure overall. First the premise - green mice? And the Mouseman was invited for some sort of performance act at the hotel. Right. There are all sorts of crime and oddness going on, and the security guard remains in his cellar room imbibing. The elevator attendants play tic-tac-toe, never once taking on passengers. There are no characters who are worth caring about through the whole disaster. 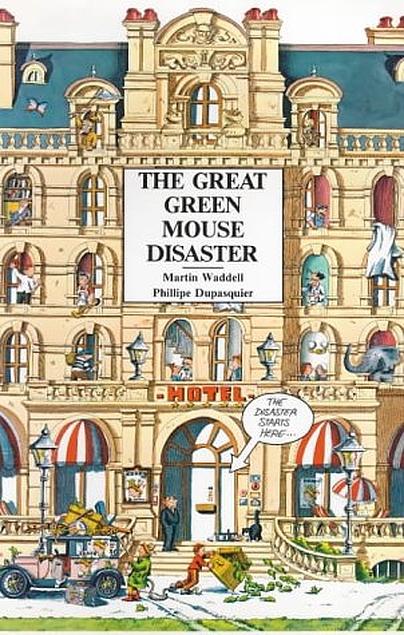