Hurrah! It's that time of year again! The Newberry Library Book Sale starts Thursday (Wednesday evening if you're an Associate): https://www.newberry.org/newberry-book-fair

If you've been forbidden to bring more books into the house, just tell your family that you're not going to buy anything, you just want to see the renovations: https://www.newberry.org/nearing-end-construction-newberry-will-begin-unveiling-... (Not that they'll believe you!) ;-)

Predictably, they will not believe me. Sadly, I have no place to put any books, with most of my current library in storage. I will live vicariously off of posts anyone decides to include here!

It was crowded today. Still looks like it's a lot under construction. But I picked up a whole bunch of Miss Read books (11!) that filled in the gaps for me, plus a few others. Filled up the bag I had brought, so I had to leave...

...but I may go back Saturday or Sunday.

And this Friday night ($5 fee) and Saturday is the Oak Park-River Forest annual book sale in OPRF High School.

I went Wednesday night, and made a nice haul. I had planned to go back on Sunday, but have an unexpected appointment for 1:00, so likely can't make it. Probably a good thing!

The art section was pretty fabulous this year, scads of stuff on Asian art, and there were far more Italian books in the foreign language section that usual.

I must say that having the LT app on my phone saved me some $$!

Wow, great haul! I was taking the subway home, so I just have to limit how much I can carry. Plus it was a Cubs game day, so I knew it would be crowded.

The Colorni book sounds very interesting, although I only know some basic Italian. Did you see any classic English Literature titles in Italian? My son & daughter-in-law (she is native Italian) are now living in England, and she is very much interested in English Literature, but is struggling with the original English. I would love to get her some classics that would be more comfortable for her to read.

Oh that's a nice haul. How is the art section this year?

I have recently gotten hooked on Gerald Durrell, after reading My Family and Other Animals. Now I look for his books.

The art section is awesome this year!

Did you see any classic English Literature titles in Italian?

I didn't notice any, but they are constantly putting more books out. It's worth a look.

>9 lilithcat: Hope there is something good left by Sunday. :)

I am always surprised at how much I can bring home on Sundays. Of course, part of that is that everything is half-price, but I am often astonished at the treasures that are left.

I'm probably going to be hitting it about noon on Sunday ... after living a couple of blocks away from there for 40 years, it's strange to have to plan a visit.

Well, I went in for my more-or-less annual visit on half-price day. Got 3 CDs, and 4 books, for a bit less than ten bucks.

I was, however, a bit irritated by this: 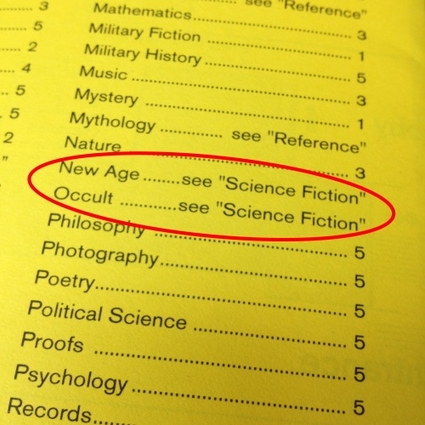 Not only is that so wrong on various levels, there was nearly nothing in the SciFi section that could fit those topics. Has Moody Bible taken over the NLBF??? It's like the selection had been purged by Fundies ...

Re. #12 I am often astonished at the treasures that are left:

I noticed that they're still cycling in new stock ... while i was going through the CDs, they were pulling out new boxes from under the tables to fill in the gaps in the ones up top ... and I'm guessing they had some similar system in place with books.

The selection in the art section was very very strong. The scary part was that the pricing was much better than previous years. Maybe I was in a buying mood but most of the art books at half price ended up being $3 dollars or less. Usually it's between $4-$8. And the poetry section was twice the size of previous years!