The author also has a 'reading list' of books about/from every country in Africa, although not all by natives of that country:

I have added a number of memoirs on South Africa to the wordswithoutborders site. People with that interest can find them there. Thanks to wandering_ star for the link.

Nirgendwo in Afrika
Finished reading: 30 May 2011

Available in English as:

In the middle of nowhere, is how we should best understand the title of this voluminous work "Nowhere in Africa", or by its original German title Nirgendwo in Afrika. As the tags on LibraryThing indicate, there is considerable confusion about the nature of this book, and its sequel, Irgendwo in Deutschland, by Stefanie Zweig. Stylistically, it reads very much like a memoir, but according to the author and publisher it should be read as an autobiographical novel.

It is with awe and horror that we read memoirs and history of the holocaust. I feel, I have to keep reading, to keep the memory of those people who underwent that horrendous fate.

Not that many books have appeared about individuals or families who escaped Nazi Germany, and found a safe haven in other countries. This book is therefore very valuable. In the first part, it described the process, a combination of luck and foresight, and the difficulties to be overcome to obtain visa and a means of living in Kenya. Another interesting feature is the description of the hesitation and disbelief of the family members in Poland that the developments in Nazi Germany meant serious deauth peril to Jewish communities in Poland and other parts of Europe, and the difficulty of realizing which luggage would be essential and which superfluous, as the family had to dissolve their household, pack up, abandon their lifestyle and move to, and settle in the middle of nowhere, deep in the Kenyan countryside, as farmers.

The book described the youth, and growing up of the main character, and life in Africa. The description of Africans is particularly warm and friendly, and the story is soaked in the deep, natural and spiritual believes of the Africans.

Unfortunately, the sequel to the story in Africa, Irgendwo in Deutschland, lacks the freshness of the first book. It describes the harsh reality of the family's return to Germany. Some features of this story are interesting, notably the description of the difficulties of living in Frankfurt, right after the end of the war, before the Waerungsreform, the years of scarcity, the solidarity between Jewish families, and the aggression of some Germans to Jewish people and the preferential treatment they received in those years. While Irgendwo in Deutschland in shorter than the story set in Africa, I felt it was too long. The repeated reminiscences about the time in Africa and the iteration of the use of expressions in Swahili created the sense that the story was dragged out too much.

Other books I have read by Stefanie Zweig:
Nirgendwo in Afrika

Just discovered this group and this thread. I recently read Ngugi wa Thiong'o's second memoir, about his years in the only boarding school for African students in Kenya at the time, In the House of the Interpreter. It was fascinating, but not as compelling or complex as his memoir about his earlier years, Dreams in a Time of War. I've reviewed both books on their respective work pages.

In the House of the Interpreter: A Memoir by Ngũgĩ wa Thiong'o 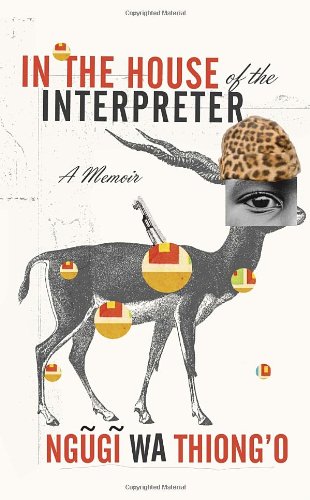 The latest book by Ngũgĩ picks up his life story where his childood memoir, Dreams in a Time of War, left off. It is April 1955, and the Kenyan Emergency, also known as the Mau Mau Uprising, is raging throughout the country. The Mau Mau, a group of Kikuyu freedom fighters, are at war with the colonial British government in an effort to achieve independence, after repeated cries to address grievances against their people were systematically ignored. The Mau Mau specialize in lightning quick strikes against the colonialists and Kikuyu supporters, which spread terror throughout the country. The British Army responds by fighting the Mau Mau in the forests and jungles, while cracking down harshly on the Kikuyu villagers who they suspect are supporting the freedom fighters.

Ngũgĩ's older brother Good Wallace has fled to join the freedom fighters, after he barely escaped with his life from an attack by local police after he visited his family in their home village of Kamĩrĩthũ. The townspeople and local officials are aware of Good Wallace's participation in the Uprising, and the family's activities are under surveillance.

As the book opens, James Ngũgĩ, the author's baptismal name, has returned from his first term at Alliance High School, the first and most highly regarded secondary school for black Kenyan students. His excitement at seeing his family again is quickly lost, as his home village has been razed to the ground, unbeknownst to him. He is eventually directed to a home guard post that has also been given the name Kamĩrĩthũ, which is essentially a concentration camp comprised of people from several nearby villagers, under guard by the British Army. Those who are loyal to the colonial government receive better housing and more freedom, and families like the Ngũgĩs are relegated to substandard living conditions and are closely monitored.

James wears his Alliance uniform proudly outside of the school grounds, as it is widely recognized as a mark of success by fellow Kikuyus, and he views it as a sort of talisman that will protect him from suspicion or harm by British soldiers. The school was founded by European missionaries and modeled on schools for the education of Native Americans and African Americans in the post-Civil War South, particularly Tuskegee Institute in Alabama and Hampton Institute in Virginia. During Ngũgĩ's years at Alliance it was led by Edward Carey Francis, a visionary Englishman who transformed the school from a largely vocational one to an institute of higher learning based on rigorous study within and outside the classroom that would mold and generate the future leaders of the country. Black teachers from across the country worked alongside their European counterparts, and as a result Alliance students were self-confident, intellectually minded, and prepared to attend university or serve as teachers and leaders within their communities.

James grows in confidence during his Alliance years, under the influence of his teachers and close classmates, as he excels in his studies, writes his first short story and becomes a respected Christian teacher to children in a distant village. However, he is deeply conflicted between his education, which is heavily focused on England as the center of the world and colonialism as beneficial to the citizens of the British Empire, and his people's desire for freedom and his concern about Good Wallace, who was captured and imprisoned by the British Army, and his mother, who was detained and tortured while he was there. He graduates second in his class, takes on a temporary teaching position, and is accepted into Uganda's Makerere University, one of the most prestigious post-secondary schools for African students. However, in the aftermath of his acceptance to university, he falls into a dangerous situation that threatens to overturn all of his hard work and success.

In the House of the Interpreter is named in honor of Edward Carey Francis, who viewed Alliance as a modern version of the Interpreter's House in the 17th century novel The Pilgrim's Progress by John Bunyan, a place "where the dust we had brought from the outside could be swept away by the law of good behavior and watered by the gospel of Christian service." It is a valuable and detailed though time limited view into Ngũgĩ's formative years, and the experiences during a time of personal and political upheaval that penetrated the fortress of higher learning that Alliance represented to him and his classmates.

I just finished The Lost World of the Kalahari about a Safari attempting to relocate the Afircan Bushmen. These peoples had been hunted and embarrassed to virtual annihilation.

Thanks to the suggestion on this thread, I'm reading African Lives:An Anthology of Memoirs and Autobiographies by Geoff Wisner Have any other members of the group come across this book? So far my main comment is that it makes me want to go out and buy lots of memoirs/ autobiographies I haven't come across before, but I'm just dipping in so far.

Not a bona fide memoir, more a travelogue, but I'm currently reading Traversa